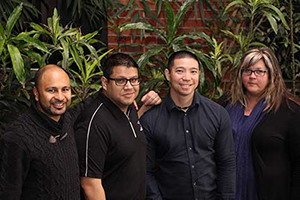 The first contract brings numerous gains to the Toronto–area workers, including regular wage increases, no transfers without member consent, and a guaranteed minimum of at least four hours per shift. The LensCrafters members also now have a grievance procedure at work.

"I like a lot of things in the agreement, and I think we made progress from what we had before," says Johnny Chow, a member of the LensCrafters negotiating committee who works as an optician.

"On behalf of Local 1000A, I want to congratulate the LensCrafters workers on coming together to achieve their first contract," says Pearl Sawyer, president of UFCW Canada Local 1000A.

"Through their union membership, and with the assistance of dedicated and experienced negotiators, the LensCrafters members have successfully improved their working conditions," Sister Sawyers adds. "And that's what the union advantage is all about."