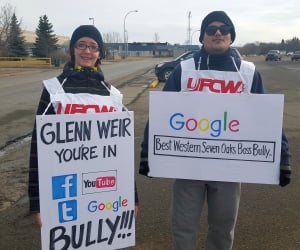 Regina, Sask. – February 29, 2016 – A recently released video that shows the owner of the Best Western Seven Oaks in Regina bullying workers has gone viral across Canada.

The video has been viewed and shared over 70,000 times since last Friday, reaching more than 140,000 people in total. It shows Glenn Weir, the owner and general manager of the Best Western Seven Oaks Inn, pushing and screaming at workers who were peacefully distributing literature in front of the hotel.

Hundreds of comments have been made on the UFCW Canada Facebook and YouTube pages, where the video has been posted. The viral video has also received coverage from CBC News, CTV Regina, and Global News, among other media outlets.

"Wow. I used to love that place. Just lost my business in the future," one Facebook commenter wrote. The video can be viewed below.

Workers at Best Western Seven Oaks have been striking in the freezing winter cold since last December in an effort to obtain respect and fairness on the job. The Best Western employees are asking for a living wage, fair benefits, and backpay, but the company refuses to negotiate.