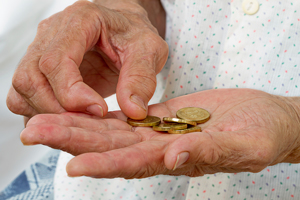 Ottawa – March 15, 2016 – A report from the Broadbent Institute reveals that poverty rates for Canadian seniors are on the rise. The report points to a worrisome trend of increasing poverty among Canadian seniors, with 2013 data showing approximately one in nine seniors lives below the poverty line.

According to the report, poverty rates varied substantially by gender and marital status; with single women 30% more likely to experience poverty in their older age. The authors of the report predict that without government action, the trend is likely to continue – if not worsen.

One of the reasons the report gives for senior poverty is the lack of an employer pension in some cases, particularly among those who earned average incomes throughout their working lives. The author, statistician Richard Shillington, found that half of Canadian couples between the ages of 55 and 64 have no employer pension. Many of these couples have little to fall back on in retirement – with about half of families without an employer-pension having virtually no savings.

"A substantial proportion of middle-income Canadians without an employer pension plan will face a dramatic drop in living standards during their retirement years. There is an urgent need to address this situation," concludes Shillington. "[The results of the study] suggests an important role for incentives to expand workplace pensions, and to enhance benefits of the Canada Pension Plan."

UFCW Canada has participated in consultations on the creation of the Ontario Retirement Pension Plan, and continues the call to expand the Canada Pension Plan to ensure that all workers can retire with dignity and security.

The full Broadbent Institute study can be found here.