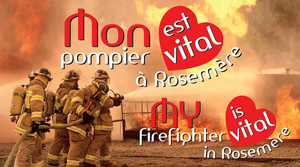 Thérèse-de-Blainville, Qué. – March 16, 2016 – Residents of the Thérèse-de-Blainville regional municipality in Québec are showing strong support for the Town of Rosemère firefighters, who are members of UFCW Canada Local 501. It took less than ten hours to garner more than 6,000 signatures for a petition demanding that the Rosemère fire department be kept open.

The Town of Rosemère abruptly fired its 38 firefighters on March 7, after voting in a special Council session in favour of a secretly-negotiated agreement with the Town of Blainville. The effect of that vote was to deprive the entire territory of the Thérèse-de-Blainville regional county municipality of its fire station and equipment, as well as 38 firefighters specialized in dealing with water and ice rescues on the Mille-Îles river.

“The people of Rosemère who opened their doors to us welcomed our initiative to gather signatures for this petition, which was submitted to the Town Council meeting on March 14, 2016,” said Benoît Gauthier, a Rosemère firefighter and union steward. “They said they were outraged by the way Mayor Leduc handled the situation. They find it unacceptable that such an important decision was not subjected to public consultation.”

The closing of the Rosemère fire station is bound to affect response times when Blainville Sud firefighters are not available; they will have to call in support from a fire station that is farther away, and that could increase wait times by 5 to 14 minutes for fires, and by 2 to 12 minutes for river incidents involving water and ice. As union steward Gauthier pointed out, “every extra minute is a minute too long when lives are at stake. By signing this petition that was submitted to Council last Monday, the citizens of Rosemère are sending a clear message that they will not accept cost cutting at the expense of their safety.”

UFCW Local 501 also filed an interference complaint with the Administrative Labour Tribunal (ALT) on March 14th, requesting an injunction under sections 3, 12, 14, 109 and 111.33 of the Labour Code and section 9 of the Act to establish the Administrative Labour Tribunal. The case was heard on March 15th. “The transfer of the Rosemère fire department to Blainville right in the middle of negotiations for a collective agreement constitutes a violation of the employees’ freedom of association. We are also asking for an injunction to stop the Town of Rosemère from interfering and ordering it to immediately reinstate the workers and keep the fire department open. We are confident that we have demonstrated that the employer was acting against the union and had failed to meet its obligations to its employees,” said Alain Lachaîne, president of UFCW Local 501.