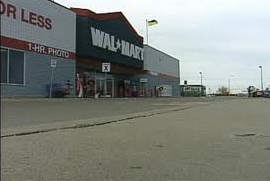 The Saskatchewan Labour Relations Board (SLRB) has ruled that Walmart has engaged in unfair labour practices under the province's Trade Union Act in the company's ongoing battle with UFCW Canada Local 1400, adding yet another labour law violation to the retail giant's long list of delinquencies.

The violation comes as Walmart continues to pressure employees at its Weyburn, Saskatchewan store to decertify Local 1400. The Board has ordered the company to provide the union with information regarding the current classification and wage rates of all store employees who are working within the bargaining unit, as well as any current and future employee promotions and wage changes. So far Walmart has refused to share this information with Local 1400, and the store is still without a collective agreement as a result of the company's unfair labour practices and anti-union stalling tactics.

The SLRB ruled that the orders of and reasons for its decision must be posted on a bulletin board in the Weyburn store, and the company has to inform employees that the documents are posted. It has told Walmart and the union to begin bargaining on the process to be followed and the content of information regarding union security; the procedure to be followed for the participation of Local 1400 officials in the orientation of employees; and the procedures for union officials to attend the workplace for inspecting notices posted on behalf of Local 1400.

At recent bargaining meetings, the union tried to reach an agreement with Walmart on Local 1400's access to members within the store, and negotiations on this matter will continue this week. Prior to the meetings, Walmart barred the union from entering the store and threatened to charge Local 1400 representatives under the province's trespassing law.

UFCW Canada Local 1400 President Norm Neault says Walmart's actions have been "absurd," but he is optimistic that the company will start cooperating if only because the Board has rejected many of the company's antics and has ordered both sides to begin bargaining.

"We will continue to strive for a fully negotiated collective agreement for our hard-working members at the Weyburn Walmart, and we hope the company will finally respect the bargaining process by negotiating in good faith," says Neault.