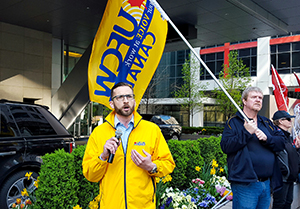 Toronto – May 13, 2016 – UFCW Canada members, officers, and staff were out in full force on Friday at a massive rally opposing the Trans Pacific Partnership (TPP), a dangerous and sweeping trade pact between Canada, the United States, and ten other countries.

Protestors gathered outside of the Ritz-Carlton Hotel in downtown Toronto – where the federal Standing Committee on International Trade is holding hearings on the multi-nation trade pact – to tell Justin Trudeau’s Liberal government that the TPP is a bad deal for Canadians.

At the rally, UFCW activists were joined by members of Leadnow, the Council of Canadians, and other labour unions in sending a united message that the TPP will kill Canadian jobs, undermine our health and our ability to govern ourselves, and accelerate climate change in the process.

UFCW Canada Local 175 Representative Tim Deelstra called demonstrators to action by citing the negative impacts of the reckless trade deal on UFCW Canada members and all hard-working Canadians during a rousing speech at the rally, which drew about 1,000 concerned community members.

Inside the hotel, UFCW Canada led the charge to oppose the TPP at the Standing Committee hearings, where Mark Hennessey, Special Assistant to the National President, spoke about the threats that the TPP would pose to workers and their families.

“Any trade agreement that allows a corporation to supersede the authority of an elected government is a bad deal for Canadians,” Hennessy told the committee. “The TPP would also have a negative impact on many of UFCW Canada’s core industries, with particularly devastating effects on the poultry, dairy, and health care sectors.”

“We are calling on the federal government to oppose this reckless, job-killing trade deal,” says Paul Meinema, the National President of UFCW Canada. “If the Trudeau Liberals are serious about creating and protecting jobs in this country, and governing in the true interests of Canadians, then they need to reject the TPP,” he adds.