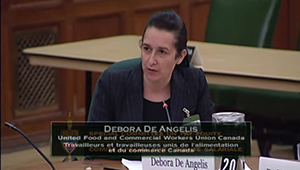 Toronto – July 4, 2016 – The House of Commons Special Committee on Pay Equity recently tabled its first report after hearing submissions from UFCW Canada and other concerned groups.

The committee was created after the House of Commons passed an NDP motion to call on the government to make good on its commitment to advance gender equality by tabling pay equity legislation. Since its establishment, the committee has released its report, "It's Time to Act", which makes 31 recommendations to close the gender wage gap.

One of the recommendations is for the government to recognize pay equity as a fundamental human right, and to put an end to discrimination related to the under-valuation of work traditionally performed by women. Another recommendation is for the immediate repeal of the Public Sector Equitable Compensation Act, which was passed by the Conservative government in 2009; a law which limits the rights of women in the federal public service to file pay equity complaints. The report also recommends a wait time of up to 18 months before legislation on the matter can be tabled.

"The 31 recommendations are a step in the right direction, but the report calls for an 18-month delay in legislation. This is unacceptable," says UFCW Canada National President Paul Meinema. "UFCW Canada believes the federal government should move to introduce pay equity legislation by the end of this year, and should implement timelines to be fair and reasonable for workers."

Ontario Regional Director Debora De Angelis presented UFCW Canada's submission to the Special Committee on Pay Equity, calling for pay equity legislation and for the government to recognize pay equity as a right.

"Equal pay for equal work should be acknowledged as a human right. Anything less is discrimination,” says Sister De Angelis. “Women workers should not have to wait to see their pay equity rights recognized.”

UFCW Canada is proud to be a part of the fight for income equality. As Canada's leading and most progressive private-sector union, UFCW Canada has launched the Closing the Gap campaign in order to bring awareness to gender wage inequality. To learn more about UFCW Canada's advocacy efforts for women, visit ufcw.ca/women.