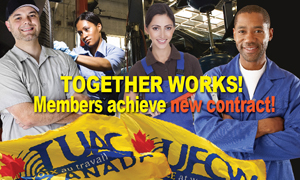 "This contract is a great achievement for the bargaining committee and the members at Park'N Fly," says UFCW Canada Local 175 President Shawn Haggerty. "It exceeds the industry's average wage increases and contains numerous improvements to health and welfare that benefit the members greatly."

The new contract features wage improvements by an average of 3% including an immediate increase of 40 cents per hour and subsequent increases totalling $1.80 per hour over the remaining years of the contract term. In addition, full-time employees will receive a signing bonus of $300, and part-time employees will receive 40 cents per hour, paid for hours worked since the expiry of the previous agreement. The premium for night shift work increases to $1 per hour, up from 95 cents.

Under the new contract, members will also receive an improved reimbursement level of 90% in addition to receiving a higher annual total coverage for prescription drugs, and the removal of a dispensing fee cap. As well, members will also now receive five paid sick days per year, up from the previous four. A new massage and physiotherapy benefit provides coverage of up to $200 in 2016, $500 in 2017, and $600 in 2018.

The new contract also contains language which establishes full-time shift bids by seniority. Part-time workers will be offered shifts by seniority up to a guarantee of 24 hours if employees are available. Additionally, there is new shift exchange language and provisions for being paid overtime when working through lunch breaks. Updated language expands bereavement entitlement to also be provided for deaths which occur out-of-country, and duration of leave has also been increased in the wake of a death of a sibling, or sons- or daughters-in-law.