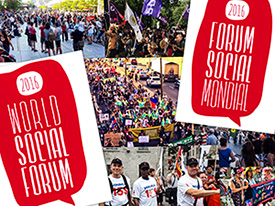 Montreal – August 15, 2016 – UFCW Canada activists joined thousands of social justice advocates from around the globe, August 9-14, at the World Social Forum (WSF) in Montreal. The WSF was first held in Brazil in 2001. Since then it has evolved into an annual gathering of activists and civil society and social justice organizations devoted to strengthening international solidarity to build a fairer and more democratic world.

Dozens of forums, and workshops were presented at this 12th edition of the WSF, including two sessions with UFCW Canada contributors. UFCW Canada activists presented at a forum on Justice and Precariousness in the Food Industry, on behalf of Canada’s leading union in the food processing and retail sectors. UFCW Canada also made a presentation on the Chevron Dirty Hand campaign. UFCW Canada, along with allies, have used the international campaign to call for justice for the victims of Chevron’s environmental and human rights abuses in Ecuador and other jurisdictions. UFCW Canada activists also participated in a number of rallies and marches throughout the week, including a demonstration in support of striking workers at the Old Port in Montreal.

Altogether, participants from over 120 countries participated in the 12th World Social Forum – building solidarity between 1,300 organizations worldwide in support of social and environmental justice, and human and labour rights.