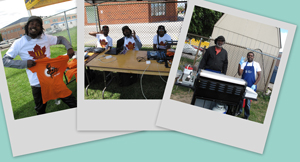 Started in 2009, the annual gathering was originally organized as a way to promote an end to gun violence, and to unify the community.

Along with UFCW Canada, this year’s event was supported by over a dozen community organizations and featured a variety of activities including live music performances, and a youth soccer tournament.

The UFCW Canada booth at this year’s event offered visitors and community members practical information on labour and workplace rights. Student Against Migrant Exploitation (S.A.M.E.) activists were also in attendance to share awareness about the challenges faced by migrant workers in Canada.

As Canada's most progressive union, UFCW Canada is engaged in community and outreach events throughout the year in its commitment to diversity and inclusion for all workers and communities.