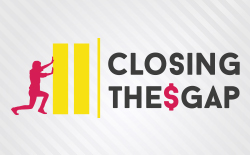 Toronto – August 26, 2016 – The release of the Ontario government’s Final report and recommendations of the Gender Wage Gap Strategy Steering Committee, "is a good first step in recognizing that the laws must change to improve the lives and future of women workers across the province,” says Paul Meinema, the national president of UFCW Canada.

The report outlines 20 recommendations on closing the gender wage gap in Ontario.

“The Gender Wage Gap Strategy Steering Committee, Minister of Labour Kevin Flynn, and Minister Responsible for Women’s Issues Tracy MacCharles have consulted and agreed that the report’s recommendations are just a first step in challenging the unjust divide between the paycheques of men and women,” says Meinema. “We will continue to advocate for next steps that proactively and legislatively ensure an end to the gender wage gap.”

As Canada’s leading private sector union for retail, food, hospitality, health care, industrial, and office and professional workers, UFCW Canada and UFCW Local Unions across the province made a number of recommendations to help the province close the 30% gender wage gap, including: extending card check certification to all sectors in Ontario to make it easier for women to form a union; enforcing and expanding pay equity laws; regulating reliable scheduling practices, and better notice periods; legislating a living wage; legislating equity compliance for workplaces and businesses; legislation for paternity leave; and providing high-quality, universal child care.

“The workplace has changed tremendously over the last generation,” says the UFCW Canada leader. “By addressing the barriers that limit women fully participating in the economy, our communities would benefit with increased spending and tax revenues, healthier families and children, and vibrant and diverse workplaces. Not taking action is not an option.”

UFCW Canada has launched a “Closing the Gap” campaign that creates awareness of the gender wage gap and asks participants to urge provincial governments to make equal pay for equal work a reality for all working women in Canada. You can participate in the “Closing the Gender Wage Gap” campaign at www.ufcw.ca/closingthegap.