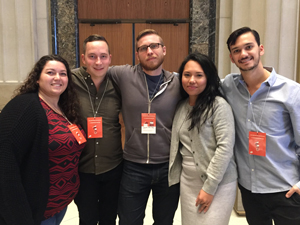 Ottawa – November 7, 2016 – UFCW Canada youth activists recently joined over 200 other youth labour allies, students, lawyers, artists, academics, and community organizers from across the country on Parliament Hill to attend a forum on precarious employment. The forum, entitled "The Precarious Generation – Millenials Fight Back" was organized by NDP MP Niki Ashton (Churchill–Keewatinook Aski) and focused on hearing the voices of young people in regards to today's job market and economy.

Over the last few months Ashton has been travelling across Canada, listening to stories from Canadian youth on issues affecting young people such as precarious employment, student debt, unaffordable housing and other factors that are making a future an uncertain future for Millenials. The forum was the culmination of the national tour and to highlight the work that young people across the country have engaged in to fight against precarity.

Participants at the forum highlighted a problem that many Canadian youth face today – being overqualified and forced to settle into temporary jobs with unpredictable schedules and no access to benefits.

UFCW Canada activists also had the chance to share their insights on precarious work, including the particular vulnerability of migrant and temporary foreign workers. Through UFCW Canada’s youth engagement program SAME (Students Against Migrant Exploitation), the union has reached out to more than 40,000 high school and university students over the last five years, to bring awareness to the extreme precariousness facing migrant workers.

The #GenYAsksY project is part of a NDP national campaign to consult with youth across the country and look at ways to strengthen job security, improve labour standards and ensure government supports are adapted to the realities of precarious work.