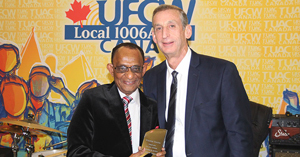 Toronto – November 15, 2016 – Long-standing UFCW Canada activist Winston Gordon was recently recognized for his years of service to UFCW Canada and the membership at a recent fundraiser.

Brother Gordon has worn many hats in his time with UFCW Canada, from organizer, union representative to Local Union President (Locals 531W and Local 1993).

"I was surprised and humbled for this recognition by our great union," said Brother Gordon. "Making life better for all workers has been my life's mission and I am thankful to the union for giving me the opportunities and to my many colleagues who have helped me along the way."

Winston's involvement with the union movement dates back to the early 1980s when he was an integral part of the organizing campaign at the Hudson's Bay Company (which was then Simpsons). He then moved on to serve as President of UFCW Canada Local 531W for over a decade, and later served as a UFCW Canada national representative helping to organize, negotiate contracts, and service units.

"I am proud to congratulate Winston on this well-deserved award," said UFCW Canada Local 1006A President Wayne Hanley, who presented the award. "Winston continues to tirelessly dedicate his life to serving the members of UFCW Canada, and we are stronger as a union because of his hard work, community outreach, and leadership."

Winston also serves on the board of the UFCW Minority Coalition, which strives to develop a unified voice, and promote diversity and inclusion within the labour movement. He is also active within and serves on the board of Faces of Our Children, an organization which raises awareness and funds in the fight against Sickle Cell Anemia.