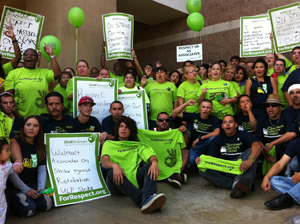 Walmart workers, with the full encouragement of UFCW members and activists around the world, came out in force on “Black Friday” to make history by leading over 1,000 protests throughout the United States.

“Walmart has spent the last 50 years pushing its way on workers and communities,” said Mary Pat Tifft, an OUR Walmart member and 24-year associate who led a protest in Kenosha, Wisconsin. “In just one year, leaders of OUR Walmart and Warehouse Workers United have begun to prove that change is coming to the world’s largest employer.”

“Our voices are being heard,” said Colby Harris, OUR Walmart member and 3-year associate who also walked off the job. “And thousands of people in our cities and towns and all across the country are joining our calls for change at Walmart. We are overwhelmed by the support and proud of what we’ve achieved so quickly and about where we are heading.”

Taking an active role in the global social media campaign, UFCW Canada’s growing network of digital responders fully supported the action on Black Friday by helping to build the campaign’s rising momentum through platforms like Facebook and Twitter. The members of Canada’s leading voice for retail workers also helped to support the historic campaign by spreading the word about the Sponsor a Striker effort, which is still accepting contributions from all activists, friends and supporters.

“The courage of OUR Walmart activists and the striking Sisters and Brothers has not only resulted in a serious, international conversation about the importance of good retail jobs, but it is also creating a new global movement that is inspiring retail workers and their communities around the world,” says UFCW Canada National President Wayne Hanley. “As workers, we all have a very important role to play in making change at Walmart, and UFCW Canada members are proud to stand shoulder to shoulder with OUR Walmart, and to help this essential movement to grow and to succeed in creating a higher standard of fairness for us all.”

To get the full details of historic Black Friday action by Walmart Workers, go to www.forrespect.org.