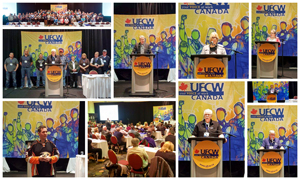 St. John’s, N.L. – April 6, 2017 – More than 100 UFCW Canada activists recently gathered in St. John’s for the UFCW Canada Eastern Provinces Council (EPC) Convention. The EPC board and staff work to support the efforts of UFCW Canada Local Unions in Atlantic Canada — Local 864, Local 1252, and Local 1288P. The convention, held once every four years, reviews the progress of the Local Unions and the EPC since the last convention, and charts the course for the four years ahead.

Members, stewards, and board members also participated in series of workshops and seminars throughout the three-day convention, March 26-28, to sharpen their skills as workplace and community activists. Topics included duty to accommodate, time standards, mental health resources, political activism, workplace diversity, as well as new EPC fundraising initiatives on behalf of the Leukemia and Lymphoma Society of Canada (LLSC).

UFCW Canada National President Paul Meinema thanked the activists on the final day of the convention. “Your activism makes a positive difference in so many ways – on the work front, in politics, in the community and in your union. Thank you for your resolve to bring equality, fairness and inclusion to workplaces and neighbourhoods throughout the Atlantic Provinces.”

The next EPC Convention will be held in March 2021.

“Everyone left the convention invigorated and committed to strengthen and grow the union,” says Mark Dobson, President of the EPC, and UFCW Canada regional director for the Eastern Provinces. “The Eastern Provinces Council may be small, but the voice of its Local Unions and membership is strong across Atlantic Canada”.