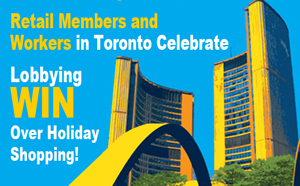 Amidst the furor over a judge’s ruling to remove Toronto mayor Rob Ford from office, an important vote recently took place by the city’s councillors that has a significant impact on tens of thousands of UFCW Canada members and retail workers in the country’s largest municipality.

Council’s decision was made after extensive lobbying and presentations by UFCW Canada Locals 175 & 633, and Local 1000A, along with representatives from the National Office.

The Local Unions and the National Office used their websites to alert residents, consumers and voters to the reasons why holiday shopping is a negative for families and the city, and encouraged them to express their concerns to their respective councillors.

UFCW Canada activists fully mobilized to encourage coworkers, family, and friends to visit the union’s campaign page to sign petitions against holiday shopping, plus many took part in a public appearance before Economic Development Committee staff and committee members to officially voice their opposition to the proposal. UFCW Canada also provided council with a written submission against holiday shopping.

Although city hall staff said their recommendation was based on public consultations, it is widely believed that corporate interests were leading the drive to open on statutory holidays. However, in the end, council ignored the staff recommendations and listened to the public. As councillor Mary Fragedakis, chairperson of the subcommittee, told councillors “the people of Toronto have spoken loud and clear, and on holiday shopping they see no need for change.”

“This is an important victory for UFCW Canada members in Toronto and all retail workers in the city,” says UFCW Canada National President Wayne Hanley. “The lobbying efforts of UFCW Canada activists paid off and this victory once again proves that taking an active role in the political process by lobbying politicians can make a direct and significant difference for the membership and the entire community.”