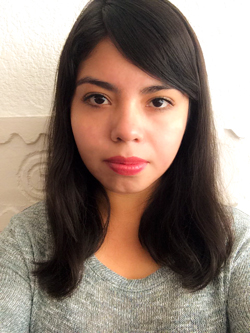 Toronto – July 12, 2017 – Katia Hernandez Acosta is one of 20 recipients of the 2016 UFCW Canada Migrant Workers Scholarship. Katia, age 23, was nominated by her mother, Victoria Acosta Cortes, who is originally from Mexico and has worked in Canada as a seasonal agricultural worker for the past 19 years.

In 1998, Victoria’s brother – who also came to work in Canada seasonally – suggested that she should enter Canada’s Temporary Foreign Worker Program (TFWP). As a single mother with a four-year old daughter and very little options for employment in her city, she decided that working under the TFWP would help her make ends meet for her family in Mexico.

Except for two seasons when she worked for approximately eight months of the year, Victoria works an average of three months per year in Canada. The rest of the time is spent earning money as a seamstress back home. Her daughter, Katia, is very excited and thankful to have won the UFCW Canada Migrant Workers Scholarship. She is working diligently to become a doctor in Mexico City.

Since 2010, Canada's union for migrant workers has received tens of thousands of applications for our Migrant Worker Scholarship program, and we have awarded scholarships to dozens of children to benefit their educational pursuits here and in their home countries.