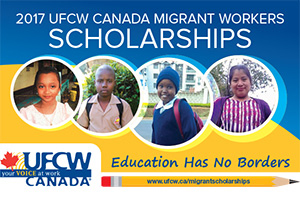 Toronto – July 31, 2017 – Yekyung Song is one of 20 recipients of the 2016 UFCW Canada Migrant Workers Scholarship. Yekyung is 11 years old and has many dreams as to what she wants to study, including medicine, dance, and aviation.

She was nominated for the UFCW Canada Migrant Workers Scholarship by her father, Nackchul Song, who arrived in Canada from South Korea in 2014 under a visitor’s visa. Mr. Song applied for an open work permit six months after his arrival in Canada. With the permit now on hand, Song works as a cook at a Korean restaurant in British Columbia.

Mr. Song’s wife, Angie An, arrived with their two children in June 2015 under a visitor’s visa. They applied to stay in Canada and Angie received a spouse visa and an open work permit as well. She always wanted to move to North America to provide a better life for her children. Both Angie and Nackchul have worked hard to adjust to their new life in Canada, and feel thankful for the opportunities they have received.

While it has been difficult for Angie and Nackchul to make ends meet due to financial constraints, they are thrilled that Yekyung will now be able to pursue her educational goals. More than anything, the scholarship has brought renewed hope and inspiration to their family.

Since 2010, Canada's union for migrant workers has received tens of thousands of applications for our Migrant Worker Scholarship program, and we have awarded scholarships to dozens of children to benefit their educational pursuits here and in their home countries.