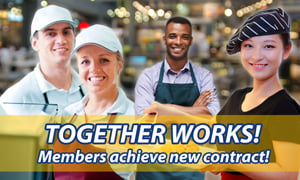 Gate Gourmet is one of the leading providers of airline catering and provisioning services in Canada and around the world.

Under the new contract, the members will see their wages increase by 10.25 percent. Other monetary increases include: improved dental plan and RRSP contributions, an enhanced shoe allowance, and added coverage to existing health and welfare benefits.

“This is a very good agreement,” says UFCW 832 head negotiator Martin Trudel. “We didn’t give the company any concessions, and we managed to improve language in other areas of the contract,” he adds.

Founded in 1938, UFCW Canada Local 832 represents more than 18,000 members in various industries across Manitoba, including the retail food, health care, food processing, security, industrial, textile, and transportation sectors, among others. To learn more about UFCW Local 832, visit their website.