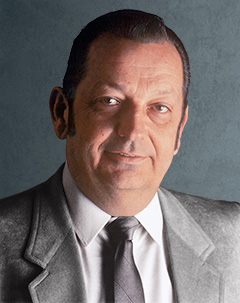 Brother Evans began his storied career with the union in the 1950s when he started working at a grocery store in his hometown of Guelph, Ontario. A natural leader and organizer, Cliff was hired by the Retail Clerks International Union in 1957, at just 19 years old, to help build the voice and bargaining power of Canadian workers.

Over the next 37 years, Brother Evans served the union and labour movement as a commanding force. As a direct result of his vision and leadership, the power of the union to make positive change for workers grew from 5,000 members across Canada to more than 185,000 members when he retired in 1994.

“Cliff’s legacy and lasting impact on UFCW Canada is unparalleled,” says UFCW Canada National President Paul Meinema. “His leadership was central to the merger of the Retail Clerks and the Amalgamated Meat Cutters in 1979 which created the UFCW, and his tenacity at the bargaining table set a new, stronger standard for generations of food and commercial workers, and their families, across the country.”

In 1988, Brother Evans became UFCW’s first Canadian Director, following the merger of regions 18 and 19, and as the union’s national leader, he laid the foundation for the UFCW’s unmatched dedication to training and education, and mentored countless activists and future Local Union leaders in every province.

Brother Evans also initiated the creation of the Canadian Commercial Workers Industry Pension Plan (CCWIPP), which, since its founding, has grown to become the largest multi-employer pension plan in Canada.

Cliff was awarded the Order of Ontario in 1996 for his many contributions to a better society.