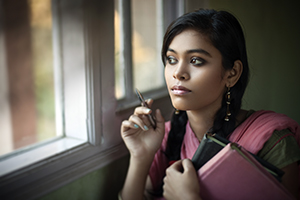 Today young workers are facing a labour market where 70 percent of newly-created jobs require some form of post-secondary education. In the last 20 years, tuition fees have increased by 137 percent. In the early 1990s, average tuition fees in Canada were $1,706, whereas today they average over $6,191 annually.

These increases are directly related to reduced government funding for post-secondary education. In Canada, public funding used to comprise roughly 80 percent of a post-secondary institution’s operating budget, while today it accounts for only 50 percent. Student tuition fees have therefore skyrocketed to make up this shortfall.

Exorbitant tuition fees place a significant financial burden on young workers. With many young Canadians occupying precarious and low-wage jobs with little or no benefits, it is becoming increasingly difficult for students to finance their education. Data from Statistics Canada shows the most frequently-reported reason that high school students do not pursue post-secondary education is the financial burden associated with college and university.

Meanwhile, students who choose to pursue post-secondary education often take on crippling debt via massive student loans. For example, between 2000 and 2010, average total student debt increased by 40 percent in Canada, and today students and graduates owe over $19 billion in outstanding loans.

Compounding these problems is the fact that tuition fees in Canada are typically the same for all students, regardless of their financial situation. This unfairly favours students from wealthy families over those from working and middle class backgrounds.

It should come as no surprise, then, that young Canadians want to see change. At UFCW Canada’s Young Workers Conference in 2016, participants listed the elimination of tuition fees as a top priority and said they’d be willing to pay a bit more in taxes if it improved access to education for all students, regardless of economic ability. Participants also expressed a desire for governments to increase funding for post-secondary education, and to transition student loan programs to grant-based programs. These grants could be used to cover attendance, text books, and housing, and would allow for the eventual elimination of tuition fees.

UFCW Canada has long supported the idea of free education, and we act on this principle by providing free online education courses via our webCampus program. In fact, through our partnerships with various post-secondary institutions, certain webCampus courses can be applied towards college and university certificates. In addition, UFCW has launched a #tosstuition campaign aimed at eliminating tuition fees across Canada. Both of these initiatives are predicated on the belief that free education is possible. With tuition fees out of control, and student debt reaching an all-time high, it’s time for our federal and provincial governments to act by tossing tuition once and for all.

Gabriel Bako is a young worker, union activist, and organizer based in Winnipeg, Manitoba.