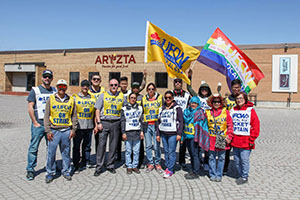 "The Aryzta members stood up for themselves to gain a better life,” says Jeff Traeger, the President of UFCW Canada Local 832. "I'd like to personally thank all those who came out to show their support on the picket line during the strike,” he adds.

The new collective agreement provides members with a 1.8 percent wage increase in retroactive pay, along with paid lunches and additional wage increases of 3.5 percent over the term of the contract.

Prior to ratifying their new contract, the Aryzta members turned down the company's final offer after taking issue with the offered shift durations and proposed wage increases.