Strike ends in victory for members at Elopak – UFCW 501 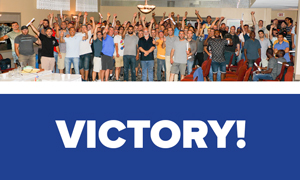 Boisbriand, Que. – June 28, 2018 – The strike at Elopak is now over as UFCW Canada Local 501 members have voted 95 percent in favour of an agreement-in-principle following intense negotiations.

Members of the bargaining committee are claiming victory as the union was able to achieve most of the members’ demands. Under the new contract, the 230 unionized employees working at Elopak will keep their existing work schedules. The employer has promised to stop hiring contract workers by 2020, which will lead to enhanced training programs. The union and the employer now have 150 days to agree on the content of those programs.

Other gains in the contract include:

Elopak is an international supplier of paper-based packaging solutions for liquid food.

Workers at Elopak went on strike on May 29, 2018 to protest their employer’s inflexibility on multiple bargaining issues, as well as the company’s complete about-face on rules surrounding working conditions.