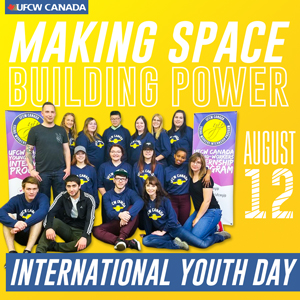 Toronto – August 8, 2018 - This year, UFCW Canada celebrates International Youth Day, August 12, by focusing our efforts on creating opportunity for young people to inspire change in our social and political landscape. As labour activists, we also celebrate the potential of young workers to make space and build power in the fight to improve working conditions, both here at home and internationally.

In recent decades, the types of jobs available to young people have changed drastically. The spread of globalization, heightened by advancing technology and digital media, has affected the way in which young workers in Canada prepare to take part in the labour force. It has also impacted how they navigate working arrangements that have become more and more precarious. Today’s young workers are overrepresented in precarious work, which often results in young people facing economic uncertainty, exacerbated by race, class, gender and ability. These types of working conditions can also hinder collective action.

Despite this, in Canada, young people have been relentless in their dedication to be heard in political and civic life. For example, the most recent federal elections saw a surge in young people exercising their right to vote. At the same time, we saw young people hit the streets, leading important demonstrations to address issues faced by those most vulnerable in our society. When UFCW Canada young workers from across the country came together during our most recent national Young Workers’ Conference, they articulated a list of priorities that they believed to be important in our labour and political organizing.

And young UFCW Canada activists are rightly proud that at last UFCW Canada National Convention, delegates of all ages unanimously passed a resolution to establish a new Young Workers Committee to amplify the voice of young workers and UFCW members across the country.

International Youth Day is an opportunity for us to take a moment to understand the different barriers that young people face. It is also a time for us to recognize the different ways in which young people can come together and challenge these obstacles. In fact, their potential highlights the kind of progressive direction in which young people can take our movement. In doing so, we commit to supporting young workers as they carve space and shape our collective power to make change.