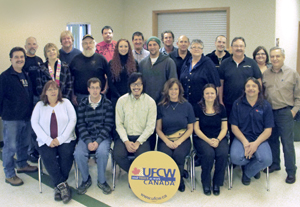 “Having the ability to effectively raise important issues with elected officials is crucial for us as union activists to protect the interests of working families and to make our voices heard at every level of government, especially here in Saskatchewan where workers and their unions are under attack,” says Norm Neault, the President of UFCW Canada Local 1400, Saskatchewan’s largest private-sector local union.

For decades Saskatchewan led North America in adopting some of the continent’s most progressive labour legislation, but since 2007 – when the conservative Saskatchewan Party took power – the province has gone from best to worst in terms of protecting labour rights and the collective bargaining process.

Lobbying and political action efforts by UFCW Canada and its allies have so far prevented Premier Brad Wall from implementing the full brunt of his anti-worker agenda, but the government has still managed to ram through a number of regressive measures, and now plans to further erode the Trade Union Act by ditching certain successor rights, and making it easier for employers to win union decertification campaigns.

“Defending labour rights in Saskatchewan and other parts of the country – like Ontario, where Conservative party leader Tim Hudak is bursting to impose ‘right-to-work’ legislation – starts with empowering UFCW Canada activists to command the attention of their elected representatives,” says UFCW Canada National President Wayne Hanley. “Only then can we ensure that incumbent politicians respect the concerns of the membership, and in places where they do not, we must use every opportunity to train and prepare UFCW Canada activists for the next election, and our chance to mobilize for political change that benefits working families.”

For more information on the Lobbying course and other political action resources for Local Unions, please contact the National Office.