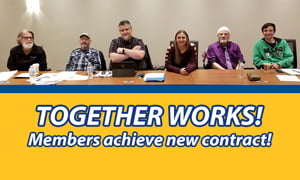 Under the new three-year contract, Sodexo members will receive six weeks paid vacation at 12 percent after 30 years of service. Other highlights of the agreement include:

As well, the regular boot allowance improves to $125 per year, up from $100 every two years.

Wages will improve by 1.5 percent as of ratification, with subsequent increases of 1.5 percent in year two and 2 percent the year after. Members will also enjoy a signing bonus of $300 for full-time employees and $150 for part-time workers. The night shift premium, meanwhile, will rise to an hourly rate of $1.00.

In addition, the Sodexo members will gain two paid sick days per year. Employees who do not use their two sick days will receive a $100 bonus payout at the end of the year. And members will also benefit from improvements to bereavement leave.