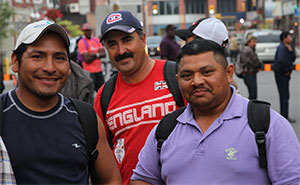 A definition of the family farm was also agreed upon in the ALRA and UFCW Canada publicly stated that it was not interested in organizing family farms. The UFCW intended to focus efforts on corporate agribusiness operations, such as factory-style hatcheries, mushroom farms, livestock feedlots, and the massive greenhouses in the Leamington area.

In early 1995, after a difficult campaign, UFCW Canada Local 1993 became the first ALRA-certified bargaining agent, representing approximately 200 workers at Highline Produce, a year-round mushroom factory in Leamington employing mainly immigrants, many of whom could not speak or read English. To our knowledge, this was the only bargaining unit certified under the ALRA.

UFCW Canada Local 1993 established to the satisfaction of the Ontario Labour Relations Board that in excess of 55 percent of the employees wished to be represented by the UFCW pursuant to the ALRA, and as such, Local 1993 was automatically certified as the bargaining agent for these employees.

At the time of this certification, other certification applications were in process, namely at Kingsville Mushroom Farm Inc. in Kingsville, Ontario, and Fleming Chicks in Beamsville, Ontario. However, in June 1995, a new government was elected, and its first legislative act was to repeal the ALRA, which returned agricultural workers to their former status with no right to representation. The effect of the repeal was to terminate UFCW Canada Local 1993's representation of the Highline employees and the other certification applications that were in progress. A new Labour Relations Act was also enacted and it excluded agricultural workers from its application.

In 1995, UFCW Canada challenged the Ontario government's decision to exclude agricultural workers from coverage under the Ontario Labour Relations Act as a violation of the freedom of association and equality provisions under the Charter of Rights and Freedoms. Six years later, the Supreme Court of Canada ruled in favour of the UFCW in Dunmore v. Ontario (Attorney General), finding that the exclusion of agricultural workers from the Labour Relations Act was a violation of their freedom of association.

The Ontario Government's response to the Dunmore decision was the Agricultural Employees Protection Act, 2002 (“AEPA””). The AEPA does not provide agricultural workers with collective bargaining rights enjoyed by workers under the Labour Relations Act. In particular, employers of agricultural workers are not under a duty to recognize unions as the workers' exclusive bargaining agent, or to bargain in good faith with unions that enjoy majority support among their employees.

In 2006, the AEPA was tested for the first time. The experience was that the AEPA proved to be ineffective in allowing workers to meaningfully represent themselves. Prior to this year, the 2006 test was the only case that workers had ever brought to the Tribunal since it was empowered in 2003.

The case was brought to the Tribunal by workers who were fired from Rol-Land Mushrooms in Kingsville, Ontario for attempting to organize. From the get-go, the hearings were bogged down in procedural wrangling. The workers never had a chance to testify and no decision was ever rendered. The workers did not feel the AEPA provided them with any protections or ability to bargain with an employer. The word spread that the AEPA was not worth using.