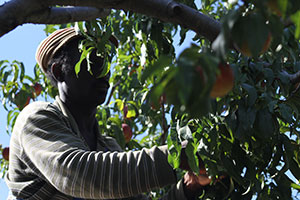 In 2008, a UFCW Canada case arrived at the Ontario Court of Appeal on behalf of the Rol-land workers, who found no remedy through the AEPA. The action was a Charter challenge of the AEPA. In November 2008, writing for a unanimous Court of Appeal, Chief Justice Winkler found that the AEPA violated Ontario agriculture workers’ right to collective bargaining and was unconstitutional. (The history of these proceedings is summarized in UFCW Canada et al v. Rol-Land Farms et al, 2008 CanLII 6652 (Ont. S.C.J. - Div. Ct.).

In March 2009, UFCW Canada filed complaints with the United Nations International Labour Organization (ILO) that both Ontario and Canada were in violation of the ILO’s Convention 87: Freedom of Association and Protection of the Right to Organize, which declares the right to collective bargaining as a fundamental human right; and under ILO Convention No. 98 – Right to Organize and Collective Bargaining, as well as the ILO’s 1998 Declaration on Fundamental Principles and Rights at Work.

In April 2009, the Ontario government's application seeking leave to appeal the Court of Appeal decision was allowed by the Supreme Court of Canada.

In December 2009, the Supreme Court of Canada heard the appeal of the Winkler AEPA decision and reserved to consider its decision.

On November 15, 2010, the ILO upheld the complaint filed by UFCW. The ILO found both Canada and Ontario guilty of a discriminatory attack on the human and labour rights of farm workers in the province. The ILO decision was forwarded to the Supreme Court of Canada to add to the other evidence and submissions in front of it.

On April 29, 2011, in spite of Ontario's violation of international human and labour rights standards, the Supreme Court upheld Ontario's appeal and judged the AEPA to be in keeping with the Charter. Despite the fact the AEPA tribunal had been "tested" in 2006-2007 and found wanting, the Supreme Court discounted this.

The fact that since 2002, prior to the present proceeding only one group of workers anywhere in Ontario ever used the AEPA to challenge their employer, is a stark indicator that that the AEPA model does not work. In 2012, in the wake of the Supreme Court decision, the ILO commented “the Committee expresses its particular concern over the relevancy of the simple provisions permitting representations in the AEPA, given that there does not appear to exist any successfully negotiated agreement since the Act’s adoption in 2002, nor has there been any indication of good faith negotiations. The Committee therefore continues to consider that the absence of any express machinery for the promotion of collective bargaining of agricultural workers constitutes an impediment to one of the principal objectives of the guarantee of freedom of association.”

While agriculture workers in other provinces have succeeded in organizing under those provinces’ labour acts, and despite the fact that over 80,000 workers are employed in the Ontario agri-industry at hundreds of locations, not one group of Ontario agriculture workers has ever been able to organize or bargain collectively under the AEPA. Evidently, the AEPA does not provide for meaningful collective bargaining. Instead, the Act weakens effective collective bargaining — without compensating with a binding arbitration provision.