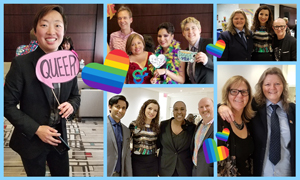 CCGSD is a national anti-bullying and anti-discrimination organization that works in communities and schools throughout Canada to fight homophobia, transphobia, and transmisogyny. The funds raised at its annual gala support over 100 students from across the country in attending the Gender and Sexuality Alliance forum, which trains young members from the Lesbian, Gay, Bisexual, Transgender, and Queer (LGBTQ+) community to become future leaders.

Held in Toronto, this year’s gala celebrated the work that the LGBTQ+ community has done to address heterosexism and cissexism in our society. The event also featured special presentations from comedian Candy Palmater, former NDP MP Libby Davies, and elder Andre Morriseau.

Through UFCW Canada’s sponsorship of the gala, our union helped support the attendance of ten students at this important event.

In addition to the gala, UFCW Canada supports several CCGSD initiatives, including the International Day of Pink and the Smash the Stigma campaign, which aims to educate Canadians on HIV/AIDS. As well, CCGSD delivers training to UFCW Canada members who provide security services at Pride Toronto every June. To learn more about CCGSD, visit their website.