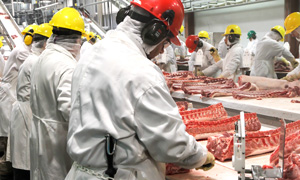 Toronto – June 27, 2019 – UFCW Canada, the country’s leading union for workers in the meat sector, is calling for swift action from the federal government in response to China’s ban on Canadian pork and beef shipments after inauthentic pork export certificates were discovered.

“Canada’s meat industry is an integral part of our economy, generating billions of dollars in revenue and supporting hundreds of thousands of jobs across the country,” says Paul Meinema, the National President of UFCW Canada. “As the union for meat workers, representing tens of thousands of Canadians employed in the meat sector, UFCW Canada is urging the federal government to take action to ensure that our safe and world-leading meat industry is not adversely affected by this issue.”

“With nearly 300,000 livelihoods at stake, UFCW is calling on the government to make this issue an urgent priority and to work with the CFIA and the Government to China to reach an immediate resolution,” Meinema adds. “Our union will be watching this matter very closely, and we hope to see meat shipments to China resume as soon as possible.”

Representing over 40,000 workers in the Canadian food manufacturing sector, and more than 250,000 members across the country, UFCW Canada is the leading union for workers in the meat industry.