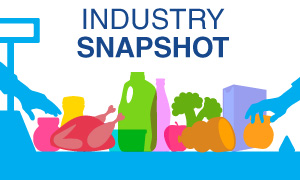 • Food inflation at retail is likely going to be beneficial to grocer margins from the current quarter. Given the flat-lining of packaged goods costs at the manufacturer level, it is clear that the increased prices at retail were not the result of costing pressure.

• Based on the pattern of Consumer Packaged Goods (CPG) prices at retail and total food prices at retail, it appears that the CPG (packaged foods, beverages, toiletries, over-the-counter drugs, and other household products) may be driving inflation. That is, the CPG drives food inflation with fresh items topping up and making an added 1 to 2 percent difference to the total basket.