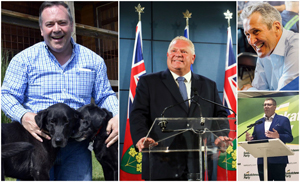 Toronto – August 27, 2019 – Conservative Leader Andrew Scheer has some big-time friends working hard to get him elected this fall. Conservative premiers across the country appear to be more interested in electing a right-wing federal government led by Scheer than looking after the citizens of their own provinces.

The conservative premiers of Ontario, Saskatchewan, Alberta, and Manitoba have all launched expensive constitutional battles in the courts trying to overturn the federal government’s carbon tax. Alberta and Manitoba are continuing their challenges to the carbon tax even though Ontario and Saskatchewan’s challenges were already rejected by their respective Courts of Appeals. Instead of investing wisely to fight climate change, Ontario and Saskatchewan will be spending money on their legal challenges by appealing the courts’ decisions. Clearly, the premiers of these provinces are more intent on helping Scheer fight the carbon tax than having a real plan to tackle climate change in their own provinces.

Saskatchewan Premier Scott Moe is perhaps the worst culprit, as he is refusing federal funding to help replace two swimming pools that are badly in need of repair because the pools are in the constituency of a Liberal MP. Manitoba Premier Brian Pallister, meanwhile, refused federal funding for energy efficiency in schools even though it did not require matching provincialfunding. Pallister is seemingly happy to harm his own province in his desperate efforts to support Andrew Scheer.

In 2018, Andrew Scheer was a proud participant at the annual Fordfest barbeque hosted by Ontario Premier Doug Ford. But Scheer was nowhere to be seen at the 2019 barbeque. This is likely because Premier Ford is plummeting in the polls and appears to be bringing Scheer down with him. Ford shut down the Ontario legislature in June and is not returning until October 28, so as not to damage the federal conservatives’ prospects in Ontario.

Then there is Alberta Premier Jason Kenney, who has pulled a page out of Ford’s playbook by shutting down the Alberta legislature. Like the Ontario Conservatives, Kenney’s government will not be recalling the legislature until after the federal election. And the premier, his cabinet ministers, and Conservatives MLAs are already out campaigning for Scheer not just in Alberta but right across the country. The federal election campaign appears to be a higher priority for Premier Kenney’s government than the many important issues facing Albertans.

Governments at all levels need to work cooperatively for the benefit of all citizens, but these four provinces are spending millions on legal challenges, refusing federal funding for major infrastructure projects, and shutting down their legislatures to boost Andrew Scheer’s electoral prospects. Instead of representing their constituents or working towards the public good in their provinces, conservative premiers are putting their party before their country.