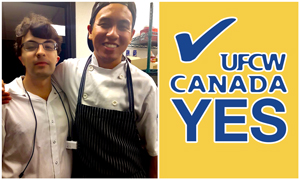 Toronto – August 28, 2019 – Hospitality workers at Le Germain Hotel in Toronto are the newest members of UFCW Canada Local 175 after recently saying “Yes!” to joining the union.

The roughly thirty new members work as servers, cooks, stewards, and bartenders. They joined the union after becoming aware of the benefits that other, unionized employees were enjoying.

Workers at the hotel also cited wage increases and transparency in the way tips are distributed as additional reasons for contacting the union.

“Congratulations to the food service workers at Le Germain Hotel in Toronto, who recently voted to become members of UFCW Local 175,” says Shawn Haggerty, President of UFCW 175. “I would like to welcome you to your union,” he adds.

To read more about the organizing victory at Le Germain Hotel, click here.