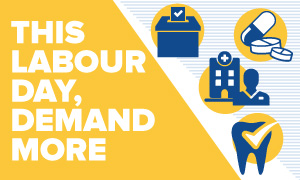 Toronto – August 29, 2019 – Every year in September, workers, union activists, and allies come together on Labour Day to celebrate the hard-won gains of working people and to advocate for additional improvements to the lives of all Canadians.

This proud tradition goes back more than a century, as the first Labour Day parades in Canada sought to pressure the federal government to expand democracy and allow for freedom of association. Eventually these efforts paid off, as workers won the right to unionize and union membership skyrocketed throughout the 20th century, helping to build the middle class in this country. And today, roughly one in three Canadian workers enjoy the benefits of belonging to a union.

Labour Day 2019 has particular importance for workers and their families, as Canadians will be heading to the polls in October to vote in this year’s federal election, and voters will be tasked with deciding which party best represents the interests of working people.

While significant progress has been made on expanding the Canada Pension Plan (CPP), increasing the Guaranteed Income Supplement, boosting the Canada Child Benefit, and repealing anti-worker legislation over the last few years, Andrew Scheer’s Conservatives pose a major threat to working Canadians.

One only has to look at the damage being inflicted by Scheer’s conservative allies Doug Ford, Jason Kenney, Brian Pallister, and Scott Moe in Ontario, Alberta, Manitoba, and Saskatchewan, respectively, to understand the type of service cuts and divisive policies that workers would face under a Scheer government.

That is why this Labour Day presents an opportunity for working people to stand up and say “no” to Conservative recklessness, while demanding more for the middle class. As the 2019 Federal Election approaches, voters will face a choice between program cuts, fearful rhetoric, and anti-worker policies, on the one hand, and the chance to bring the Canadian dream to more people, on the other – by reducing prescription drug costs, providing affordable child care to families who need it, and making dental care part of our universal health care system.

This Labour Day, let us reflect on the gains achieved by workers and their unions demanding a better life for everyone, and move towards a future where universal pharmacare, child care, and dental care are a reality for all Canadians. I wish you and your family a happy Labour Day.