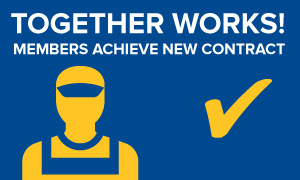 To reach an agreement for the members at GDI Sussex Centre, the union negotiating committee requested the help of a conciliation officer.

Items in contention for the members at GDI Sussex Centre included wages and achieving health benefits for the first time in this agreement.

The employer will also contribute 87 cents per hour worked toward the employees’ dental plan. In the third year of the agreement, members will qualify for health benefits.

Bereavement language improves to include grandchildren under the three-day provision. Employees are now entitled to four weeks’ paid vacation after 10 years of service with the company. In addition, employees benefit from an additional floater day to bring them to three in total.

How can you gain the benefits of a UFCW contract?