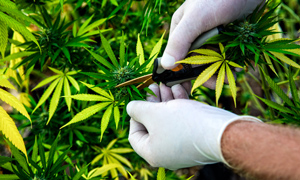 In 2016, UFCW Canada became the first union to commence organizing cannabis workers in Canada, with a unionization drive at MedReleaf in Markham, Ontario. Soon after, the Ontario Labour Relations Board deemed the workers to be agricultural, thereby denying them the right to form a union. Unlike most provinces, agricultural workers in Ontario are excluded from the Labour Relations Act and are instead covered by the Agricultural Employees Protection Act (AEPA). The AEPA does not obligate employers to bargain collectively with employees, fails to require an independent grievance procedure, and does not protect the right to strike.

Opposed to the union’s legal challenge are Ontario’s Ministry of the Attorney General, the Ontario Federation of Agriculture, and MedReleaf. The Ford government, the agribusiness lobby, and wealthy cannabis corporations are all deeply opposed to any efforts to protect organizing rights for cannabis and agricultural workers. Ontario and Alberta are the only jurisdictions to exclude agricultural workers from the Labour Relations Act. On October 16, 2019, the Labour Board in British Columbia conducted a vote for UFCW Canada at the Tilray cannabis production facility in Nanaimo. The union and the workers anticipate the ballots will be counted soon.

In June of this year, the Government of Canada implemented a program of open work permits to protect migrant workers who have been experiencing physical, psychological, financial, and sexual abuse. In Ontario, UFCW has assisted migrant workers to apply and obtain open work permits, estimating that more than 50 migrant farm workers have obtained these open work permits, proving that agriculture workers deserve the right to collective bargaining in order to enforce their labour rights and protect their wellbeing.

UFCW Canada will continue its case at the Tribunal over the coming weeks and months. The hearings are open to the public and will examine testimony by worker representatives, academic experts, and industry spokespeople. The case will have broad implications for cannabis and agricultural workers across Ontario.

With more than 250,000 members across the country, UFCW Canada is the leading voice for cannabis and agricultural workers. UFCW has extensive collective agreements representing thousands of cannabis workers in California, Oregon, Colorado, Washington, Minnesota, and New Mexico. In Toronto, the union recently ratified a collective agreement covering call centre workers at the Ontario Cannabis Store. In the 2001 Dunmore case, the Supreme Court found the Ontario government guilty of violating the Charter by excluding agricultural workers from the Labour Relations Act. The union maintains the AEPA also violates the Charter, as proven by employers in the cannabis and agricultural sectors who have refused to bargain with the union.

To read more about UFCW Canada’s work in the cannabis sector, or to learn how you can join the country’s leading union for cannabis workers, visit UFCW’s Conscious Cannabis website.