Walmart workers in Maryland and Texas walk off job 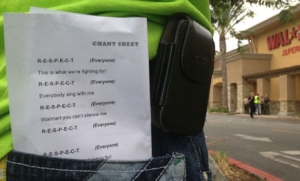 Washington, DC – February 11, 2013 – Walmart workers in Maryland and Texas citing Unfair Labor Practices (ULP) committed by Walmart, walked off the job on February 7 to protest the company’s attempts to silence workers who speak out for better jobs.

The worker action came in response to reports of Walmart managers telling Walmart workers that their actions taken last Black Friday were illegal, any future attempts to strike would be illegal and punishable, and for associating or even talking with Organization United for Respect at Walmart (OUR Walmart) could lead to termination.

“The reason I decided to strike was because I cannot allow Walmart to mislead, threaten and intimidate myself or my fellow associates. We have rights and legal protection and if we don’t stand up to these misleading and downright untruths now, Walmart will continue its behavior and that is just unacceptable. We must hold Walmart accountable for their actions,” says Colby Harris, a Dallas, TX Walmart Associate, OUR Walmart leader and striker.

Energy around the calls for Walmart to publicly commit to changing its treatment of workers and communities has been building.  Last year, thousands of Walmart Associates and their supporters took unprecedented actions against Walmart in response to illegal actions the world’s largest private employer has been taking against its workers.  We saw Walmart workers walk off the job from California to Maryland, in protest against the company’s attempts to silence workers. And in the fall for the first time in the history of the company, we saw the first group of Walmart associates go on strike. As a result nearly 1,200 protests and actions took place at Walmart stores for its treatment of employees and the communities they occupy.

Following the protest, Brother Harris and other Walmart workers went to the National Labor Relations Board to file an official complaint against Walmart for their latest action to silence and intimidate workers.