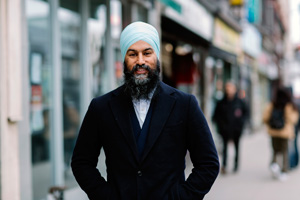 Toronto – April 7, 2020 – As the federal and provincial governments try to deal with the COVID-19 pandemic, one politician has been working diligently behind the scenes to ensure that the federal response helps workers and their families.

Back on March 19, Jagmeet Singh and Canada’s NDP wrote to the prime minister with a list of immediate actions that the government could take to protect jobs, keep workers on payroll, and provide the financial assistance that people need. The actions outlined included immediate financial assistance of $2,000 per adult and an additional $250 per child; an increase in the wage subsidy, from 10 percent to 75 percent; the suspension of rent, mortgage, and utility bills; a moratorium on evictions; and mandating banks to waive interest fees and charges on credit cards, bank loans, lines of credit, and mortgages.

Singh has also supported the government’s existing actions, while pointing out where these measures fall short and calling on the government to do more. In addition, there are few leaders in this country who can bring some of the country’s largest unions, including UFCW Canada, and the Canadian Federation of Independent Business (CFIB) together to sign a joint letter calling for a significant increase to the proposed wage subsidy.

Meanwhile, the pandemic has revealed a serious leadership void in the federal Conservative Party, which seems to be struggling to read and understand the concerns of Canadians. For example, in his latest news conference, Andrew Scheer rambled on about illegal border crossings and the carbon tax – issues that surely rank low on the priority list as Canadians deal with job losses, reduced incomes, and challenges paying rent.

By contrast, Jagmeet Singh and the NDP continue to raise important issues around support for seniors and students and the need for a clear plan to deliver the necessary supplies and equipment that are desperately needed in Indigenous communities. They have supported government initiatives but have not hesitated to point out the faults in these plans, especially when it comes to getting resources into the hands of Canadians as quickly as possible.

As we continue to work together to weather this crisis, it is encouraging to know that Jagmeet Singh and the NDP are working hard to put the interests of Canadians first, rather than worrying about their own political interests.