Calgary – February 14, 2013 – UFCW Canada members and activists joined more than 200 community members in Calgary for the Fifth Annual Memorial March for Murdered and Missing Women. The Calgary march is one of many memorials held across the country every February 14, to honour and remember the more than 700 Indigenous women across Canada who have died over the last two decades as a result of violence, or whose disappearance remains unsolved. 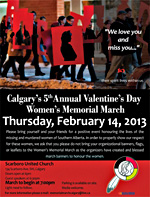 UFCW Canada has participated and helped promote the annual Calgary memorial since its inception.

"We have gathered as a community to honour the humanity of the women who have been so cruelly wrenched from their families," said Suzanne Dzus, a Mohawk woman and the co-chairperson of the Calgary march. “People must remember that these women were mothers, daughters, sisters, grandmothers, aunts and nieces. Each was a special person and human being — not just a statistic."

Before the march, Aboriginal elders led the gathering in a prayer and smudging ceremony. Then, to the sound of drums and song, the marchers set out along 17th Avenue carrying banners and cut-outs bearing the names of women missing and murdered.

"The march is about remembering but also about raising awareness that violence against our Sisters continues," said Sister Dzus. "A society that allows violence against one particular group is ultimately bad for everyone. We should think about whether we want to raise our children and grandchildren in a country where this kind of violence is acceptable.”

The Native Women’s Association of Canada, the Assembly of First Nations, and a number of other community groups have repeatedly called on the Harper government to hold an inquiry into the epidemic of missing and murdered indigenous women in Canada. The Harper government has repeatedly refused, and two years ago cut off the funding to a database project specifically set up to document unsolved cases of murdered and missing Aboriginal women and girls.