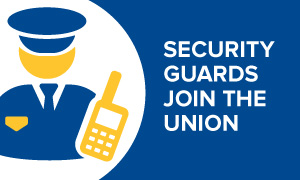 Waterloo, Ont. – March 1, 2021 – Barber-Collins security guards working at the Waterloo City Hall in Waterloo, Ontario are the latest to join UFCW 333 after voting overwhelmingly in favour of union representation.

These dedicated security guards are responsible for securing numerous City of Waterloo properties such as municipal parks and services, parking, recreation, in addition to by-law enforcement.

The guards sought union representation to address issues surrounding wages, benefits and scheduling which will be major sticking points in contract negotiations.

“We hear it all the time from non-union security guards,” says Ken Willet, UFCW 333 Business Agent and Organizer. “Our wages are too low, we need benefits, better scheduling and recognition for our hard work, but we can’t do it alone, so we call the union with a proven track record of getting security guards the respect they deserve.”