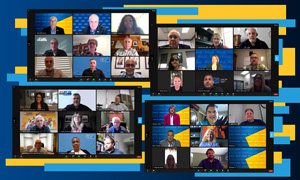 Toronto – May 5, 2021 – The UFCW Canada National Council convened virtually, as COVID-19 continues to threaten communities, including tens of thousands of UFCW members who have worked throughout the pandemic to keep Canada going.

The meeting of the National Council opened with a traditional land acknowledgement and welcome from recently retired UFCW Indigenous sub-committee member, and now UFCW Canada Resident Elder, Eric Flett. Elder Flett commended UFCW’s inclusion efforts, and encouraged the union to push ever harder along the pathway of Reconciliation.

National President Paul Meinema led the Council in a moment of silence to honour and commemorate the lives of UFCW members lost to COVID-19. Brother Meinema was joined by UFCW International President Marc Perrone, who also paid tribute to the sacrifices and heroism of UFCW members on both sides of the border. Brother Perrone also briefed the Council on the impact of the recently elected Biden Democratic administration, which is pro-union, and ready to push for labour-friendly legislation.

UFCW Executive Vice-President Stuart Appelbaum then joined the virtual meeting to update the Council on the organizing battle south of the border where Amazon recently used an arsenal of intimidation tactics to thwart a RWDSU-UFCW union drive at an Amazon warehouse in Alabama. Charges against Amazon have been filed with the National Labour Relations Board (NLRB).

As the union's national executive board, the UFCW Canada National Council meets twice a year to assess the state of the union, decide on national strategies for strengthening the membership's bargaining power with employers, and to develop plans for helping more workers join the union.