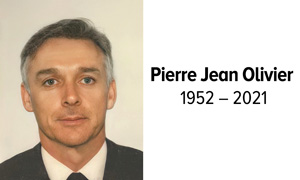 Pierre Jean, affectionately known by colleagues and comrades as PJ, first joined UFCW after his former union, the textile workers, merged with UFCW in Quebec. Coming from a strong union family – PJ’s mother Madeleine was a leading force for the textile workers – brother Olivier dedicated himself to the labour movement and representing workers.

A skilled and well-respected negotiator, PJ assisted many UFCW local unions throughout Quebec in making countless contract gains and he continued this work with Local 502 after retiring from national staff in 2008.

Pierre Jean also served a central role on the UFCW Textile and Garment Council, and was labour co-chair of the Textiles Human Resources Council, one of the tripartite sector councils established by the federal government to collaborate on industry issues during the 1990s and early 2000s.

Pierre Jean is survived by his mother, his wife Micheline Lalonde, his daughters Élise (Felice Terriaca) and Ariane, and his adored granddaughters Emma and Bianca, as well as the difference he made for many UFCW Canada members and workers.