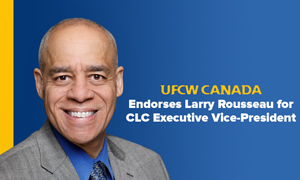 Toronto – June 11, 2021 – UFCW Canada is pleased to endorse Larry Rousseau for CLC Executive Vice President – a role that he has proudly served in since 2017.

Larry has a long history of labour activism, from helping union members as a shop steward to serving as the Regional Executive Vice-President of the Public Service Alliance of Canada (PSAC) Capital Region.

A prominent voice on health and safety and labour relations in Canada, Brother Rousseau’s leadership and activism in LGBTQ2SI, anti-racism, and peace movements, and his unwavering commitment to social justice, have helped him engage and inspire union members across the country.