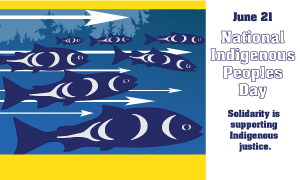 Toronto – June 14, 2021 – Canadians are called to recognize and celebrate the unique heritage, culture and contributions of First Nations, Inuit and Métis peoples on National Indigenous Peoples Day – June 21. It is also an important time for non-Indigenous peoples in Canada to learn more about the role settlers have played in Canadian history.

Previously referred to as National Aboriginal Day – National Indigenous Peoples Day has been celebrated in Canada since 1996. June 21 in the calendar year marks the start of the summer solstice, an important season for many Indigenous peoples and communities who have commemorated this occasion with special ceremonies for millennia. Official recognition for this day is the result of the advocacy of many Indigenous nations and community members.

For the first time in our nation’s history, September 30 of this year will mark The National Day for Truth and Reconciliation which gives official recognition of the traumas endured by Indigenous Peoples in Canada. All workers employed in the federal government and other federally regulated industries will observe the new statutory holiday.

Bill C-5 establishes The National Day for Truth and Reconciliation and was given royal assent on June 3 of this year and following the horrific discovery of 215 child graves at Tk’emlups te Secwepemc First Nation and the site of the former Kamloops Residential School. It is estimated that the number of existing mass child burials at former residential schools surpasses the estimates of the Truth and Reconciliation Commission (TRC), which projected 4,000 across the country.

As a leading union in the country, we must continue to push employers to negotiate this new statutory holiday into all future collective bargaining processes. In doing so, we support Indigenous UFCW Canada members through our labour activism and in the process of collective bargaining.

To find out more about our work in support of Indigenous justice, click here.