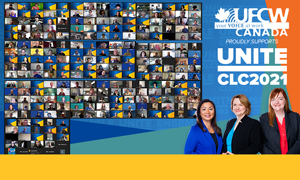 Ottawa – June 16, 2021 – With a historic number of registered delegates, UFCW Canada members are ready to get to work on shaping the agenda of Canada’s labour movement in unprecedented times.

Team Unite is poised to lead the CLC at a time of national reckoning on issues of racism, Indigenous justice and building back better.

UFCW Canada is also pleased to endorse Larry Rousseau for CLC Executive Vice President – a role that he has proudly served in since 2017.

Delegates will have an opportunity to vote on important resolutions that tackle our collective response to gig work and ensuring as a labour movement we stand against hate while supporting Canada’s reconciliation with First Nations, Inuit and Métis peoples.