Food processing workers at TruHarvest join the union – UFCW 1006A 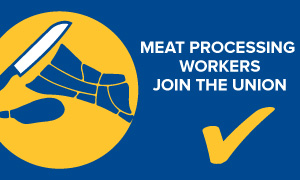 Toronto – October 8, 2021 – Food processing workers at TruHarvest recently joined UFCW 1006A after voting overwhelming in favour of union representation in a vote held by the Ontario Labour Relations Board (OLRB).

“Many of our members at TruHarvest already know the strength and protection that union representation provides,” said UFCW 1006A President Wayne Hanley. “It is inspiring to see their solidarity and dedication to each other and their desire to making their workplace better.”

Members knew first-hand the advantages of belonging to a union and having a union contract. They believed winning this vote was the quickest way to reaffirm their membership in the union and start negotiating their union contract.

"We deserve dignity and respect, we wanted benefits, secure hours, scheduling, better wages and an end to favouritism,” said TruHarvest worker, Luis Abarca. “The only way to achieve this is by having a collective agreement, this is why overwhelmingly, we voted yes.”

The bargaining unit is made up of more than 50 workers and the issues to be addressed at the Toronto meat processing plant include benefits, wages, and transparency.

“These workers were previously unionized and understand the value of being able to participate in union contract negotiations and the job stability that comes with unionization,” said UFCW 1006A Director for Organizing Lesley Prince. “I am excited they have the opportunity to get the workplace improvements they deserve.”

UFCW Local 1006A represents 36,000 members in a wide range of sectors across Ontario, including the grocery retail, food processing, hospitality, laundry, warehousing, transportation, and eye care industries. To read more about UFCW 1006A and its outstanding work, visit the Local Union’s website.