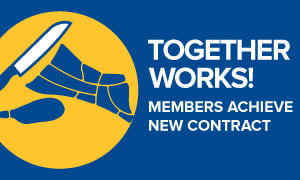 The new contract brings the hiring rate up to $20.50 per hour and reduces the time between the first increase from 24 months to four months, at which point the hourly rate goes to $22.85. Eligibility to access the dental plan is also reduced to four months and bereavement leave is increased to five days.

To read more about the collective bargaining victory at Olymel, click here.

UFCW Local 1991-P represents over 6,000 members at more than 60 companies across Quebec. To learn more about UFCW 1991-P, visit the Local Union’s website.