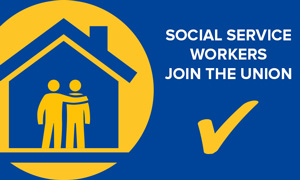 Vancouver – March 28, 2022 – Staff at Vancouver Native Housing Society (VNHS) in the Downtown Eastside of Vancouver have taken a major step towards improving their working conditions after voting “Yes!” to joining UFCW 1518.

The new members work at the Orwell supportive housing building that is owned and operated by the not-for-profit VNHS. Two workers at the Society said they look forward to “being able to discuss ongoing issues, help solve them as a team, and be better connected with the community.”

Solidarity and compassion drove this organizing effort, and it is what the new members want more of at their intense workplace. The Orwell is home to fifty-five tenants – majority Indigenous – who require mental health support, and more specifically, support with drug use, disabilities, and intergenerational trauma.

Staff at the Orwell provide 24/7 front-line support that ranges from housecleaning to mental health crisis intervention. They are also exposed to overdoses and instances of violence sometimes.

After researching the collective agreements at other Vancouver Native Housing Society buildings, two of which are already unionized with UFCW 1518, and other comparable non-profits, the workers learned that they’re earning at the low end of the wage scale. Their other benefits are minimal too, considering the emotionally straining work they do, which is taking a toll on their own mental health and personal lives.

The group also wants to usher in several other improvements, including better extended healthcare benefits, which they want to expand to part-timers; a safer work environment with more support from management; job security so staff can support themselves and their families; fairer wages (equity between staff); and more work-life balance. To read more about the organizing victory at Vancouver Native Housing Society, click here.

Are you a non-unionized worker who would like to enjoy the benefits of a UFCW Canada union contract? Do you and your co-workers want to gain the union advantage at work? Join Canada’s best union, UFCW Canada, to make your workplace better today. Click here to join now.