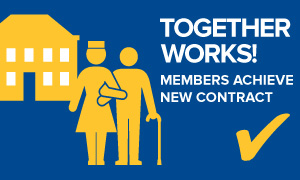 Overtime pay is now calculated after eight hours or eighty hours bi-weekly, in addition to roll over of unused sick days to a maximum of eight days or 40 percent pay out. Members with seven years or more of service will receive one float day in year three of the new contract, in addition to an agreement by the employer to contribute 1 cent per hour worked towards the Local Union’s Training & Education Fund.

To read more about the collective bargaining victory at The Royal Henley, click here.

UFCW Canada Locals 175 & 633 represent more than 70,000 hard-working Ontarians in almost every sector of the economy. To learn more about the outstanding work of UFCW 175 & 633, visit their website.