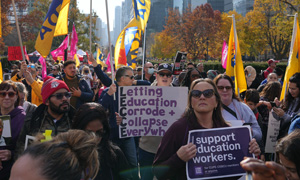 Toronto – November 7, 2022 – UFCW Canada stands in solidarity with the Ontario labour movement as it galvanizes support for CUPE members who are locked in a bitter struggle with the conservative government of Premier Doug Ford who is seeking to curtail collective bargaining rights while running amuck of the nation’s constitution.

Tens of thousands of activists and allies have coalesced to defend workers’ right to collective bargaining and stop the draconian use of the ‘notwithstanding clause’ to push the Ford government’s anti-union agenda.

Picket-lines went up last Friday morning after CUPE education workers executed their strike mandate in defiance of the Ford government’s Bill 28 which was rammed through the Ontario legislature just a day prior.

Bill 28 amounts to one of the most egregious violations of collective bargaining rights in the province’s history as it not only imposes a contract on CUPE members but also attaches $4,000 in daily picketing fines on some of the lowest paid public sector workers in Ontario.

UFCW Canada is calling on all activists to stand in support of CUPE members as Bill 28 sets a dangerous precedent across the entire labour movement where governments can decide to disregard parts of the Canadian constitution it deems inconvenient to their agenda.

As a movement we must draw a clear line in the sand when it comes to freedom of association as an injury to one is an injury to all.